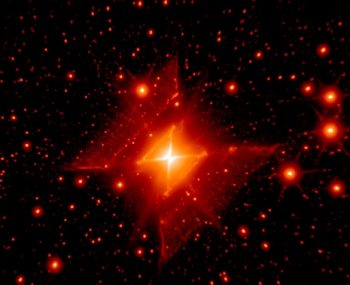 Scientists have dubbed a newly discovered nebula the "Red Square" because of its near-perfect symmetry:

Seen in the infrared, the nebula resembles a giant, glowing red box in the sky, with a bright white inner core. A dying star called MWC 922 is located at the system's center and spewing its innards from opposite poles into space. (A nebula is an interstellar cloud of gas, dust and plasma where stars can both emerge and die.)

'This spectacular event is the death of a star,' said study team member James Lloyd of Cornell University.

After MWC 922 ejects most of its material into space, it will contract into a dense stellar corpse known as a white dwarf, shrouded by clouds of its own remains.

The Red Square nebula discovery is detailed in the April 13 issue of the journal Science.

What is particularly astonishing about the Red Square, the researchers say, is the degree of symmetry seen in lines, or 'rungs,' that bisect its surface. The rungs appear as shadows, and their makeup is uncertain. 'The high degree of regularity in this case may point to the intriguing possibility that these bands are shadows cast by periodic ripples or waves on the surface of an inner disk close to the star at the heart of the system," Lloyd said.