Posted on Friday, May 11 2007 @ 13:51 CEST by Thomas De Maesschalck
EA just released the release notes of patch 1.05 for Tiberium Wars on the C&C3 forums. The patch will be launched soon and will feature lots of balancing changes, bug fixes, new maps and other enhancements.

The following balance changes are intended to enable a more- diverse set of viable strategies for both casual and competitive play, and to further ensure that the forces of the GDI, the Brotherhood of Nod, and the Scrin are evenly matched as Tiberium Wars rage on. 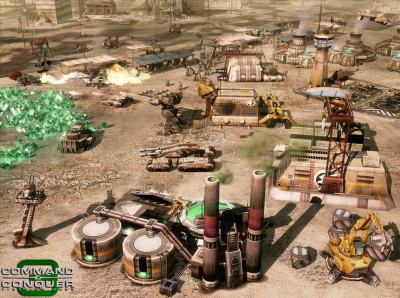 GDI Balance Changes Brotherhood of Nod Balance Changes Scrin Balance Changes New Multiplayer Maps
Added four new multiplayer maps, which may also be used in Skirmish mode. Two out of four of these maps are enabled for ranked competition online, and so will appear in the Automatch map rotation.

Map 1: Tournament Rift
Red Zones such as this have long since become uninhabitable to any of Earth's life forms, and yet serve as a focal point for the conflict between the GDI, the Brotherhood of Nod, and the Scrin, in their continued efforts to gain control over the alien mineral. This is a two-player map available for ranked matches.

Map 2: Tournament Coastline
As the spread of Tiberium inexorably continued across the world, GDI and Nod forces found themselves frequently skirmishing for control over strategic coastal regions such as this one. This is a two-player desert map available for ranked matches.

Map 3: Schlactfeld Stuttgart
The Scrin, desperate for Tiberium, savagely laid waste to this once-proud German city in short order. Now fighting over the green crystal continues in the city's ruined remains. This is a two- player urban map available for unranked matches.

Map 4: Coastline Chaos
An extension of Tournament Coastline, this map is based on the very first map used to publicly showcase Command & Conquer 3 Tiberium Wars at the 2006 Electronic Entertainment Expo. This is a four- player desert map available for unranked matches.

User Interface Enhancements Bug Fixes Other Changes
Looks like this will be the first huge update for C&C3 :)