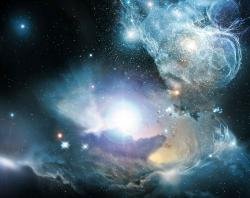 Some scientists believe that massive quantities of dark matter may have formed the "dark stars" in the early days of the universe:

Instead of burning with hydrogen fusion, these “dark stars” were heated by the annihilation of dark matter.

And these dark stars might still be out there.

Just a few hundred thousand years after the Big Bang, the Universe cooled enough for first matter to coalesce out of a superheated cloud of ionized gas. Gravity took hold and this early matter came together to form the first stars. But these weren’t stars as we know them today. They contained almost entirely hydrogen and helium, grew to tremendous masses, and then detonated as supernovae. Each successive generation of supernovae seeded the Universe with heavier elements, created through the nuclear fusion of these early stars.

Dark matter dominated the early Universe too, hovering around normal matter in great halos, concentrating it together with its gravity. As the first stars gathered together inside these halos of dark matter, a process known as molecular hydrogen cooling helped them collapse down into stars.

Read on at Universe Today.