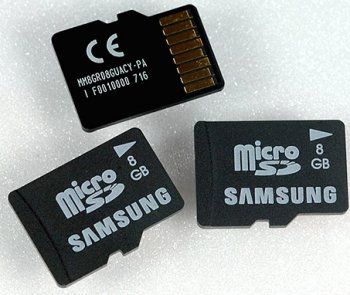 SD cards, to date, have been largely used for data storage in digital still cameras and increasingly in televisions. MicroSD cards, which are a quarter the size of an SD card, are backward compatible with SD cards using an extender, to allow multimedia files downloaded by mobile phones to be easily displayed on other media.

With a read speed of 16 Megabytes (MBs) per second and a write speed of 6MB/s, Samsung’s 8GB microSD card well exceeds the Speed Class 4 SDHC (Secure Digital High Capacity) standard which requires a data write speed of 4MB/s. This is also much faster than the SD Speed Class 2 designation carried by most competing microSD cards currently on the market.

This achievement is the latest in a string of record-breaking improvements in flash memory cards for Samsung as it continues to aggressively pursue its goal of being the development leader for the SD card market, as well as the competing MMC (multimedia card) market.

The market research firm Dataquest predicts that the memory card market as a whole will average 10 percent annual growth between 2006 and 2010, while demand for high density 8GB cards will grow an average of 2.6 times per year over the same period. By 2010, the 8GB memory card will be the market mainstream in terms of units sold.