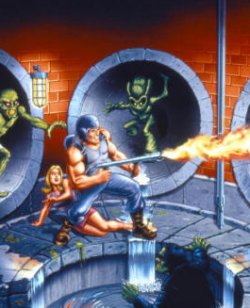 3D Realms, which are said to be still working quite hard on Duke Nukem For(n)ever, have just released one of their old games as freeware.

It's Alien Carnage, a game that was first released about fourteen years ago.

We've been involved with many games in our history, but this was the only one to undergo a name change after it had been released. In hindsight, the name change probably wasn't the best move, but at the time it was felt the Halloween Harry name made people think it was merely a "Halloween themed game". Still, the game had one of the more unique final bosses in one of our titles (I won't spoil it if you don't know), and it is still a lot of fun almost 14 years later.

As with a lot of our games from this era, time and computers marched on, passing the game by. Alien Carnage had issues with running under Windows, and as such was discontinued from our product line on April 21, 2000 due to the aforementioned technical problems. It's been dormant with us since then. There actually was a sequel produced entitled "Zombie Wars" (which we didn't have anything to do with). But today we're here to bring the character of Halloween Harry back. Today we're releasing Alien Carnage into freeware with the permission of John Passfield. John participated in our Legacy Interview series last year, and at that time was not ready to release Alien Carnage as freeware. But now he is, and here's the game!

You can download it over here. Be aware that you need DOSBox to run the game as it doesn't work under Windows 2000/XP/Vista.