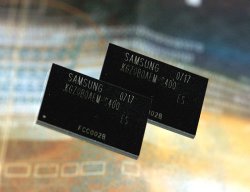 Samsung announced the creation of a new 4GB multi-chip package (MCP) for cell phones. The firm says this chip eliminates the need for an external memory card slot and also eliminates having to develop interface software for all types of NAND memory.

Samsung’s new moviMCP is a multi-chip package carrying an embedded (moviNAND™) memory solution, which provides a simple-to-design memory package that satisfies the high-speed data transmission needs of mobile phones, while fully supporting the communication features within the handset.

The new moviMCP combines a 4GB embedded memory card, which consists of two 16Gb (gigabit) NAND flash chips and a controller, together with a 1Gb mobile DRAM chip to support the processor and a 2Gb NAND flash chip for general handset operations. This provides a total memory capacity of 35Gbs.

Samsung's use of an eMMC interface, the MultiMediaCard Association (MMCA) standard for embedded memory, resolves the design complexity inherent in the functional differences of the various types of NAND flash, by integrating an embedded controller, into the moviMCP. This removes the need to develop interface software for each type of NAND flash.

The new moviMCP stacks several memory functions vertically to enable a small footprint. Its high density eliminates the need for having to also provide an external expansion slot.

According to market research firm iSuppli, the 3G mobile phone market - which is the main target for Samsung’s new moviMCP - is expected to reach 392 million units in 2007 and show an approximately 40 percent compounded annual growth rate from 2007 through 2010.