SilverStone aims for PSU with 95% efficiency 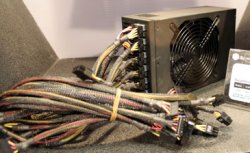 The Inq had a chat with SilverStone at Computex 07 and learned a thing or two about their upcoming power supplies.

To improve the quality of their power supplies SilverStone recently moved the production of their new power supplies from China to Taiwan. From now on the PSUs aren't made by hundreds of workers but by robotic arms which put all the components onto the PCB.

The first SilverStone PSU made in Taiwan is the 1200W Decathlon but soon other high-end models will also get the Taiwan treatment. The Inq took a closer look and says there's a certain German-precision feel on the Taiwanese PSUs.

However, this is not the only thing these lads are considering. Next step is to get 95%+ efficiency, but in order for that to become a reality, some communication between a motherboard and a PSU will have to be realised. Some core logic inside the PSU, some on the motherboard and a serious redesign of internal wiring... then again, Google already does it. It does not take a rocket scientist to figure what is required.