Posted on Monday, Jun 18 2007 @ 10:25 CEST by Thomas De Maesschalck
The Team17 developers are working on a new Worms: Open Warfare 2 game for the Nintendo DS and Sony PSP. Shacknews had an interview with Andrew Aveyard, Junior Production Assistant at Team17.

Shack: Tell us about the single-player campaign. What historical backdrops will be available on which to wage battle?

Andrew Aveyard: Without giving too much away, the single player campaign takes place over six themed environments inspired by conflicts throughout the ages-past, present and future. I can't reveal all of the environments because some of them are not announced yet. However, I can say that the first four levels are "Pirates!," a homage to the Spanish Armada, "World War I," "World War II" and "Cold War." 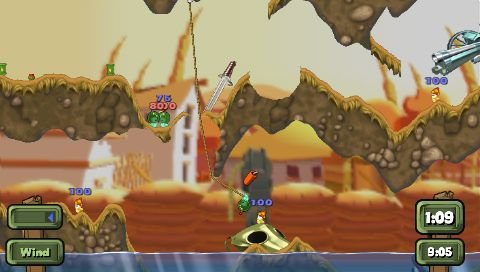 Read on at Shacknews.