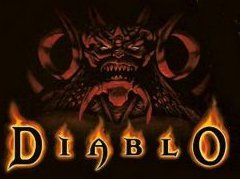 Firingsquad reports The Legendary Pictures may be working on a Diablo movie:

The Legendary Pictures web site has a listing on their "Coming Soon" portion of their web site which shows the title "Diablo" which has lead to speculation that a movie version of the Blizzard action-RPG of the same name is in the works at the company. Legendary Pictures, which produces films exclusively for Warner Bros. Studios, already has the rights to make a World of Warcraft movie. Their previous credits include Batman Begins, Superman Returns, and 300.