The hottest thing in the phone market: touch screens 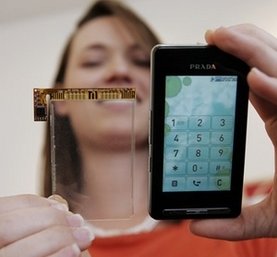 One of the new waves in the phone market will be the arrival of more and more units with touch-sensitive displays.

Shipments of this advanced strain of touch screens are projected to jump from fewer than 200,000 units in 2006 to more than 21 million units by 2012, with the bulk of the components going to mobile phones, according to a forecast by iSuppli Corp., a market research company.

"This new user interface will be like a tsunami, hitting an entire spectrum of devices," predicted Francis Lee, the chief executive of Synaptics Inc., a maker of touch sensors.

Synaptics' latest technology is in a growing number of cell phones, including LG Electronics Co.'s LG Prada touch-screen phone that launched this year in Europe and South Korea and handles gesture-recognition similarly to the iPhone.

Apple does not comment about its component suppliers, and Lee declined to comment whether Synaptics is working with Apple on the iPhone.

Last fall, Nokia Corp.'s research and development unit unveiled online images of a prototype all-touch-screen cell phone called the Aeon, but the company hasn't disclosed any details of its features or market availability.

"Touch screens are going to be more common, period, because rivals will slap them on to compete with Apple," said Michael Gartenberg, an analyst at JupiterResearch.

Research firm iSuppli says that about 4 percent, or 38 million units, of all phones shipped in 2006 had a touch screen. The firm expects this will increase to 90 million units by 2012.