Posted on Thursday, Jun 28 2007 @ 22:26 CEST by Thomas De Maesschalck
Firingsquad published some info and screenshots of an upcoming game from NetDevil called Warmonger. This game uses the Unreal Engine 3.

The game itself has evolved a lot in the past few months. The framerate has improved and more importantly we can see how the game's destructible environments actually affect gameplay. In one level we played the location was in a series of ruined parking garages. You can destroy stairs in the game that will cut off one path for your opponents to use. The game doesn't have a lot of weapons. You have what looks like a cross between a crowbar and medical instrument as a melee weapon along with a low powered pistols. The three main weapons are your machine gun with a sticky grenade launcher as an alternate fire. You also have a rocket launcher with a scope. Finally there is a chain gun that you can activate a energy shield that protects your front and allows you to fire but doesn't allow you to move. 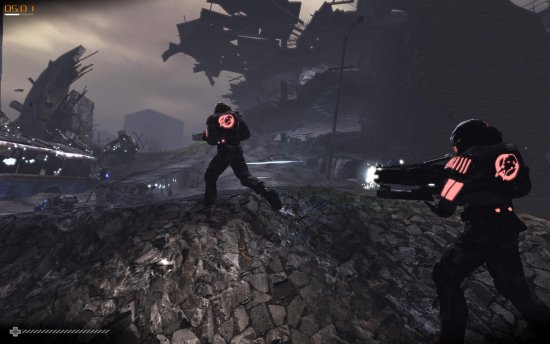