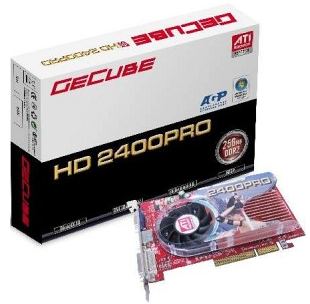 A few hours ago I published a news post that Radeon HD 2400 AGP cards would be launched in August and I just received an e-mail from a reader that the German price comparison site Geizhals is already listing 3 AGP cards based on the ATI Radeon HD 2400 GPU.

Pricing starts at 57.49EUR for an AGP Radeon HD 2400 Pro card with 256MB DDR2 memory but unfortunately the cards aren't available yet. Most webshops are only taking preorders but there are two shops that claim they are able to ship the 256MB GeCube AGP card in 24h.

Here's a look at the pricing and specifications of the cards: