Civilization IV: Beyond The Sword interview

Posted on Friday, Jul 27 2007 @ 06:50 CEST by Thomas De Maesschalck
Firingsquad talks with Firaxis about their upcoming Civilization IV: Beyond The Sword expansion:

FiringSquad: What new units and characters will be a part of Beyond the Sword?

Jesse Smith: We’ve added some great new units to fill needed roles, rather then adding exotic units and trying to find roles for them. For instance, the Cuirassier is a new mounted unit that takes the place of the old Cavalry unit in the technology tree. We pushed Cavalry back to require rifling, which extends the age of the musket and makes the straight shot to Military tradition less of a dominant strategy. Another example of a unit filling a much needed role is the anti-tank gun, which is an inexpensive early counter to Tanks. You are no longer helpless if your enemy is first to Industrialism and has access to Oil. And…the paratrooper is a really fun unit with a unique role. It can perform jumps onto strategic spots in enemy territory before an invasion (as it has in other versions of Civ), but now the AI knows how to effectively use it. 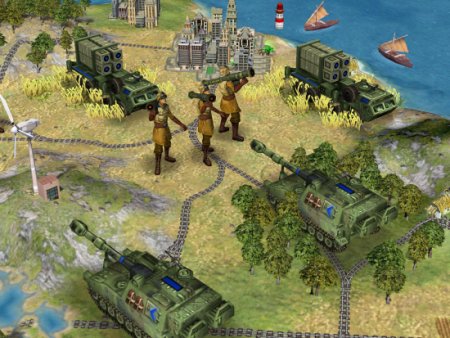