Posted on Saturday, Jul 28 2007 @ 19:21 CEST by Thomas De Maesschalck
Firingsquad has published an article about their first impressions of Fallout 3:

The demo began with the opening trailer that was released over a month ago that showed the post-apocalyptic world of Fallout; a world that mixed destruction with some interesting satire and humor in the world's visuals and ads. Indeed the game's future world is based on what futurists and sci-fi artists of the 1950's thought the future would look like; one of nuclear powered cars and art-deco buildings. The nuclear war between China and the US changed all that, of course. While most of the world burned, Fallout 3's story really begins inside Vault 101, an underground bunker that was filled with survivors. The vault's massive circular door was then closed and sealed and as the game's narrator (voiced by actor Ron Perlman) mentions, it's never meant to ever be reopened. By the way, the game is supposed to be set about 30 years after the end of Fallout 2 but there's no need to really know what happened in the first two games to understand the plot of Fallout 3. 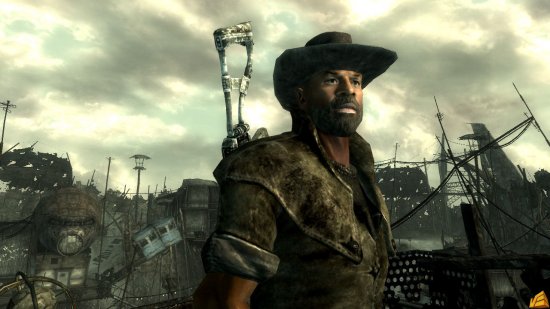