Motorola phones to get Microvision projector 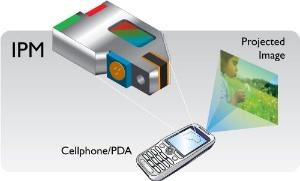 In January at CES 2007 a company called Microvision showed off an ultra-small projector for cell phones. They still had to do some work on it but it looked pretty promising.

Today I read over at Engadget that Motorola is considering to use Microvision's PicoP laser projection technology in their cell phones.

Unfortunately, the agreement looks to amount to the production of a functional prototype only for the time being. While the prospect of an 854 x 480 resolution projection is certainly titillating, we doubt our gadget vanity can withstand the extra chub and battery drain the tech would introduce on our slim, sexy handsets. Then again, the geek cred gained could offset the lack of swank. No worries, we've got several months (if not a couple of years) to grow up before product is ready for consumers.