Posted on Wednesday, Nov 05 2003 @ 20:25 CET by Thomas De Maesschalck
We already reported about Intel his transistor breaktrough yesterday which reduces power leakage and thus also reduces heat. Here is some more information from the press release which Intel released today and a link to an animation which tries to make a visual presentation of their improvement:

Intel researchers have developed record-setting, high-performance transistors using a new material, called high-k, for the "gate dielectric" and new metal materials for the transistor "gate." Transistors are the microscopic, silicon-based switches that process the ones and zeros of the digital world. The gate turns the transistor on and off and the gate dielectric is an insulator underneath it that controls the flow of electric current. Together, the new gate and gate dielectric materials help drastically reduce current leakage that leads to reduced battery power and generates unwanted heat. Intel said the new high-k material reduces leakage by more than 100 times over the silicon dioxide used for the past three decades.

Intel will use this advancement along with other innovations, such as strained silicon and tri-gate transistors, to extend transistor scaling and Moore's Law. According to Moore's Law, the number of transistors on a chip roughly doubles every two years, resulting in more features, increased performance and decreased cost per transistor. To maintain this pace of innovation, transistors must continue to shrink to ever-smaller sizes. However, using current materials, the ability to shrink transistors is reaching fundamental limits because of increased power and heat issues that develop as feature sizes reach atomic levels. As a result, implementing new materials and innovative transistor structures is imperative to the future of Moore's Law and the economics of the information age.

All transistors have an insulator material, called a gate-dielectric that is critical to their operation. For the last 30 years, silicon dioxide has served as the material of choice for this key transistor component because of its manufacturability and its ability to deliver continued transistor performance improvements at smaller sizes.

The second part of the solution is the development of a metal gate material, since the high-k gate dielectric is not compatible with today's transistor gate. The combination of the high-k gate dielectric with the metal gate enables a drastic reduction in current leakage while maintaining very high transistor performance, making it possible to drive Moore's Law and technology innovation well into the next decade. Intel believes that these new discoveries can be integrated into an economical, high-volume manufacturing process, and is now moving this transistor research into the development phase. 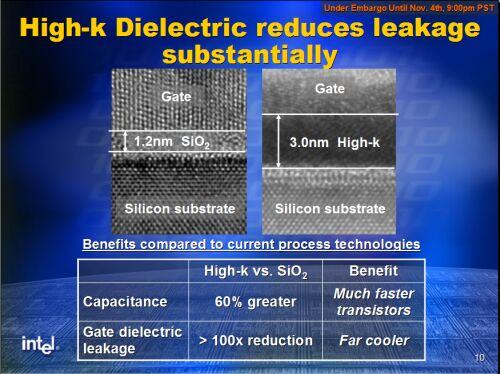 Like we already reported transistors with these new materials are an option targeted to be integrated into future Intel processors as early as 2007, as part of the company's 45-nm manufacturing process. Intel will discuss the details of this improvement on Nov. 6 at the 2003 International Workshop on Gate Insulator in Tokyo

An animation can be found here