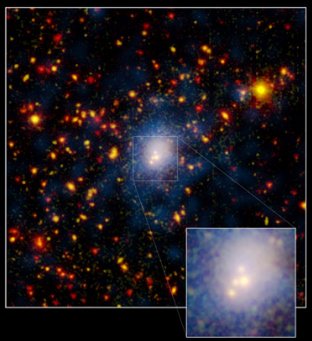 Scientists have found four gigantic clashing galaxies with the help of NASA's Spitzer and Chandra space telescopes along with ground-based observatories. Scientists believe when this merger finishes this giant galaxy will be one of the biggest in the universe.

The clashing galaxies are expected to eventually merge into a single, behemoth galaxy up to 10 times as massive as our own Milky Way.

Details of the research appear in Astrophysical Journal Letters.

The rare observation offers an unprecedented look at how the most massive galaxies in the Universe are formed.

Collisions, or mergers, between galaxies are common in the Universe. Mergers between one large galaxy and several small ones, called "minor mergers", have been well documented.

Astronomers have also observed "major" mergers among pairs of galaxies that are similar in size. But, until now, no major mergers between multiple large galaxies have been seen.

"It's the first one that I know about. So far, nobody has written to me to say they've found another four-way merger," said co-author Kenneth Rines, of the Harvard-Smithsonian Center for Astrophysics, in Cambridge, US.