Posted on Sunday, Nov 30 2003 @ 22:54 CET by Thomas De Maesschalck
I have added a mirror for a great program called Speedfan 4.09. I already use it for a couple of months and I really like it. It is a clean, orderly simple program to measure temperatures, voltages and fan speeds. You can also adjust the speed of fans with this program and a lot more.

SpeedFan is a freeware program that monitors fan speeds, temperatures and voltages in computers with hardware monitoring chips. SpeedFan can even access S.M.A.R.T. info for those hard disks that support this feature (almost all :-)) and show hard disk temperatures too, if supported. SpeedFan can even change the FSB on some motherboards. At the lowest level, SpeedFan is an hardware monitoring software, but its main feature is that it can control the speed of the fans (depending on your sensor chip) according to the temperatures inside your pc, thus reducing noise and power consumption. Most Winbond sensors and ASUS AS99127F support fan speed changing, as well as others from MYSON, ANALOG DEVICES, NATIONAL SEMICONDUCTORS and ITE, but the motherboard should make use of available pins. This means that if you have, say, a W83782D on a BP6 then you're ok. If you have a W83782D on some GigaByte's... you're not :-) SpeedFan works fine with Win9x, WinME, WinNT, Win2k and WinXP. SpeedFan can be minimized to the tray and is compatible with Motherboard Monitor 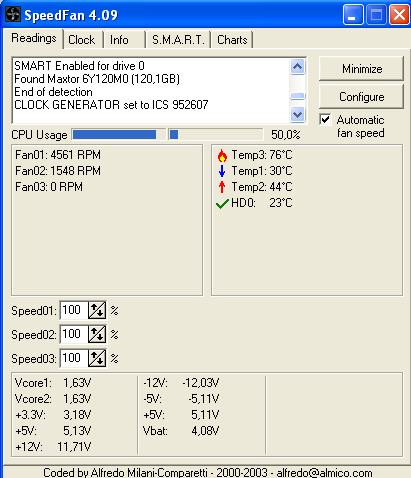