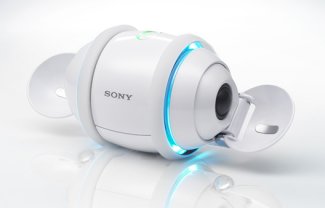 Sony officially unveiled the Rolly SEP-10BT Sound Entertainment Player in Japan for 40,000 yen (about $350). Engadget has some info about the device:

ot quite a domestic robot, not quite a portable audio player, not quite a boombox, the Rolly flutters about, dancing and playing MP3, ATRAC, or AAC tunes via either Bluetooth with A2DP / AVRCP or its 1GB of internal memory. In fact, not only does Rolly dance to your music, apparently you can also choreograph it and share your Rolly moves with pals over the internet. A full charge gets you five hours straight music, four hours of dance and music, or three and a half hours dancing, music, and Bluetooth use together -- fantastic news for people with a clean desk and tons of time to kill.

Doesn't really look that interesting IMO but perhaps the gadget-hungry Japanese will go wild for it.