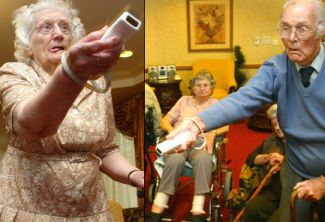 Nintendo intended the Wii console to be a gaming system not just for gamers but for everyone. This tactic seems to be sucessful, Nintendo has now sold more units of its new console than Microsoft and Sony and is still selling amazingly well.

An article at Engadget reports the console isn't only for kids or young adults, the elderly seem to adore the Wii too:

Similar to stories we've seen before, the UK's gossip rag The Sun is reporting that seniors at the Sunrise Home in Birmingham, UK, have taken to the console like super-old fish to water. The pensioners at the institution have been engaging in knock-down, drag-out contests in Wii Sports -- playing tennis, boxing, and bowling with a cut-throat competitiveness not seen since the Dark Ages. Barrie Edgar, 88, one of the home's residents said, "It's great fun. We've only had it a few days but we can't put it down." Mr. Edgar then glanced at Tilda Montgomery, another Sunrise Home occupant and exclaimed, "Prepare to be pwned, you old bird."