Posted on Tuesday, Dec 09 2003 @ 19:49 CET by Thomas De Maesschalck
To celebrate the launch of their first graphics cards XGI launched a new marketing campagne. They put two different contests on their website to promote their new Volari cards: one with a puzzle, and another one in which you need to email friends about the contest:

Put together the Volari Puzzle and you'll be automatically entered to win the latest Volari Duo graphics card from XGI, plus other amazing prizes with total over $500 worth of the ultimate gaming package!

By sending the Double Up with Volari event to 3 friends, and you'll get the chance to win one graphics card every week for four weeks.

The contest can be found here


The XGI Volari Duo V8 is launched a few days ago, and normally this cards should be available in shops real soon. But strange is that not even a single big site has a review about this card posted yet.
Club3D, the European partner of XGI recently launched their Volari Duo V8 Ultra card with 2 cores running at 350MHz, and 256MB DDR II memory running at 400MHz. This card is limited available in Europe. A review of this card can be found here on a German site named Hardware-Tweaker.de 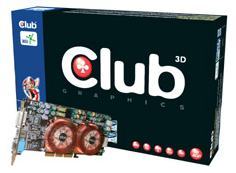