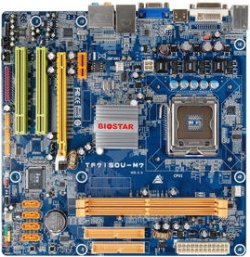 BIOSTAR TF7150U-M7 is created to support CPUs with 1333MHz FSB, giving you the flexibility to build PCs with today and future’s CPUs. TF7150U-M7 is based on NVIDIA GeForce7150 GPU, which supports DirectX 9.0 and Shader Model 3.0 and offers shared memory size up to 512MB. TF7150U-M7 is one of the greatest multimedia motherboards to have three video ports onboard, HDMI, DVI and D-Sub.

Integrated HDMI and DVI with HDCP
On-board HDMI and DVI connectors are designed to meet the output protection management (HDCP) and security specification of Blu-ray and HD DVD Formats, allowing the playback of encrypted movie content on PCs when connected to HDCP-capable display

There's also the Biostar TF7100P-M7 motherboard which features the GeForce 7100 - it has similar specifications but lacks HDMI.