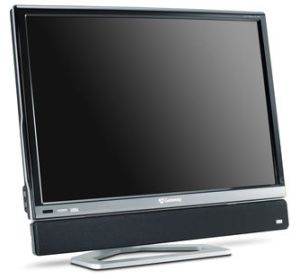 Gateway unveiled a new 30" computer LCD display - the XHD3000 Extreme HD. The firm markets it as a Quad HD display as it offers four times the resolution of standard 720p HD.

PC and video enthusiasts who want a premium viewing experience can use the Gateway XHD3000 as a single high-end display to work with multiple input devices, such as a PC, TV, game console, set-top box, and DVD-player. It supports up to six simultaneous video inputs, such as desktop and notebook computers, Xbox 360, Sony PlayStation 3, Nintendo Wii, Blu-Ray, TiVo, DirecTV, HD DVD and more. In addition to an HDMI interface, it has single and dual-link DVI, component, S-video, composite and VGA connections.

The new XHD3000 comes with a new four-device universal IR remote control that can be used to access not only the display, but also three additional devices, such as a Media Center PC, cable or satellite set-top box and DVD player. The included IR Blaster cable allows for remote transmission of IR controls directly from the XHD3000 via the universal remote as well as from other devices’ remote controls to AV equipment behind cabinets.