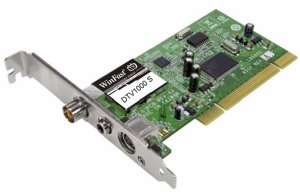 And it is simplicity itself upgrading your home PC entertainment. Inserting WinFast DTV1000 S, plug in a TV source and run the setup wizard for immediate enjoyment of both high definition digital TV and DVB-T radio. With HDTV/AC3 support, Winfast DTV1000 S delivers the most realistic cinematic effects. All the latest video and audio encoding formats are also supported by WinFast DTV1000 S and recording and capturing digital video from digital TV, VCR, camcorder or LD/VCD/DVD player has never been more facile.

Powered up with the exclusive WinFast PVR2, all useful functions, like DirectBurn, Time Shifting, Scheduled Power-up, Power on/off by Remote, and TwinView, are simplified and put into a two-layer menu with a user friendly interface. Even more, WinFast's all-in-one I/R sensor remote control makes viewing more 'comfy' than ever before. And not to forget that the value added WinFast Mobile Video Express (WinFast MoViE) pack comprises a 3D Album, iPod & PSP Video Converter and Orb.