Posted on Monday, Dec 29 2003 @ 22:00 CET by Thomas De Maesschalck
RAM memory producer Elpida has signed a five-year during deal to produce 0.10 micron products at SMIC his 300mm fabrication facility in China. The production is sheduled to start in Q4 2004.

The two companies had previously collaborated in foundry arrangements at the end of 2002 regarding production of Elpida's 0.13 micron-based DRAMs.

"Elpida moves one step closer to achieving our target production ratio of 50:50 between our own fabrication plants in Hiroshima and external foundries," said Yukio Sakamoto, president of Elpida Memory, Inc. "Elpida's advanced process technology and SMIC's cost efficient and high quality production capacity is a winning combination that steers us toward becoming the number 3 DRAM supplier in the world."

This collaboration with SMIC will increase Elpida's production capacity as well as provides the benefits of more flexible sales logistics, increased local-content and reduced tariffs on memory chips for the growing Chinese market. 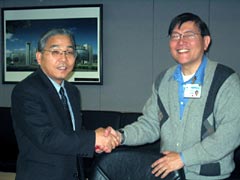