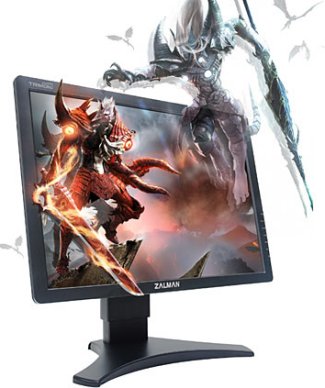 Zalman published details about its 3D display at its website. Their new 3D displays are available in 19" and 22" versions and can display both 2D and 3D images.

However, according to TweakTown there are some significant drawbacks:

You might wonder about the latter requirement and the answer is simple, Zalman relies on Nvidia’s 3D stereoscopic driver, which is flaky at best. At least the glasses you get with the Zalman displays look more like a pair of naff shades than something really nerdy as early types of stereoscopic glasses with LCD shutters used to be like.

There are some real downsides to using these displays if you’ve got a multi-core system, as several games are limited to only using one core and you have to disable the rest, which is simply just pathetic. You can also only play games at full screen resolution, as otherwise the 3D effect doesn’t work. You’re also limited to using a GeForce 5, 6 or 7-series card, as the 8-series isn’t supported and if you’ve got Windows Vista, well then you can forget about it all together, at least until next year when Nvidia is expected to release a new driver.

I guess you better go watch Beowulf in a movie theather if you want to experience some 3D imagery. More info at Zalman.