The Niagara Falls seen from space

Posted on Monday, Dec 03 2007 @ 00:20 CET by Thomas De Maesschalck
Here's a photo of the Niagara Falls taken by one of NASA's satellites.

A blue-green veil of water tumbles 51 meters over the rocky precipice of the Niagara Falls in this Ikonos image, acquired on August 2, 2004. Every second, more than two million liters of water plummets over the half-circle of the Canadian/Horseshoe portion of the Niagara Falls, shown here, making it one of the world’s largest waterfalls. The force of the pounding water is sending a cloud of mist up from the bottom of the falls; this same force eats away at the rock behind the falls, pushing them back as much as two meters per year. 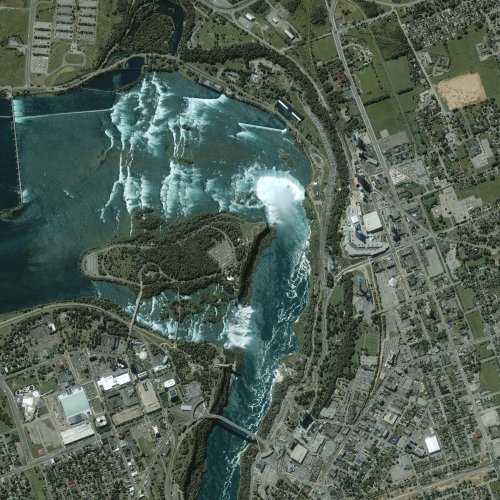