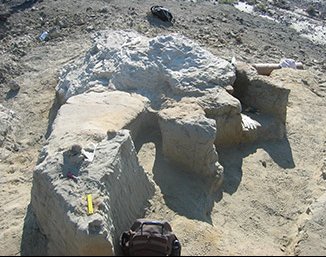 Preserved by a natural fluke of time and chemistry, the four-ton mummified hadrosaur, a duck-billed herbivore common to North America, could reshape the understanding of dinosaurs and their habitat, its finders say.

"There is no doubt about it that this dinosaur is a very, very significant find," said Tyler Lyson, a graduate student in geology at Yale University who discovered the dinosaur in North Dakota.

"To say we are excited would be an understatement," said Phil Manning, a paleontologist at England's University of Manchester who is leading the examination. "When I first saw it in the field, (I thought) 'Shiiiit, that's a really well preserved dinosaur.' It has the potential to be a top-10 dinosaur, globally."

"The skin has been mineralized," said Manning. "It is an actual three-dimensional structure, backfilled with sediment."

The fidelity of the envelope, he said, raises the possibility that Dakota could contain other soft-tissue remnants, including muscles and organs.