Posted on Thursday, Dec 06 2007 @ 06:12 CET by Thomas De Maesschalck
Art Lebedev announced they're now selling four Optimus Maximus keyboards, you can already preorder them and according to the firm the keyboards should ship in February 2008.

Besides the $1,564 "superman" kit which features 113 OLED keys the firm has three cheaper versions:

First there's the Beginner's kit which features one measly OLED key in the space bar. According to Art Lebedev this is really useful to display the language used but I can't really think of any good use for this keyboard which is priced at a massive $460. You read that right, not $46 but $460 for a keyboard with one tiny OLED.

The Advanced kit is a better deal as this kit features 10 left-side OLED keys but I believe that it's $599 price tag won't appeal to many consumers.

Then there's also the Pro user's Optimus Maximus keyboard with 47 OLED keys but that board costs $999.

Art Lebedev also says users of the beginner, advanced and pro kits will be able to upgrade their keyboards with additional OLED keys. The firm aims to sell single and 10-pack OLED sets for about $15 per OLED key. 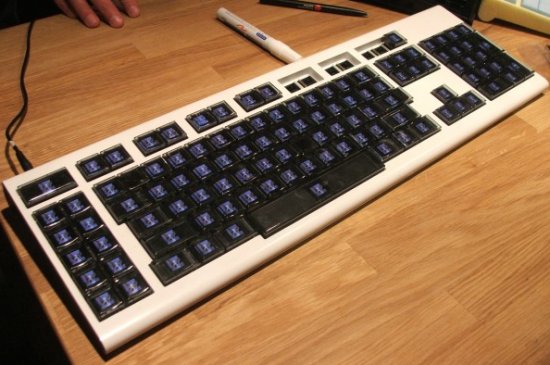 To be honest, each time I hear about the Optimus Maximus I get less and less impressed by it.