Posted on Friday, Dec 07 2007 @ 00:25 CET by Thomas De Maesschalck
ECS unveiled a new GeForce 8800 GT graphics card, the GeForce 8800GT Dual Turbo. This card features a passive cooling system from Arctic but you can also mount two fans on the heatsink to get the temperatures a bit lower. 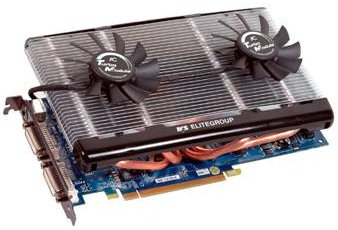 It's probably a good idea to reduce the cable clutter in your case a bit before you install this graphics card, those two fans are very exposed. Another potential issue with this cooling system is that it takes up quite some space and doesn't exhaust the hot air out of your case.