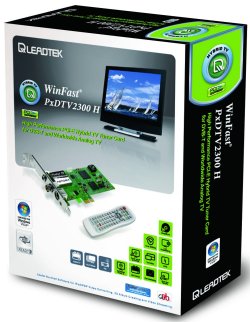 With users demands constantly in mind, Leadtek announced the launch of its high performance hybrid TV capture card with the latest PCI Express interface—WinFast PxDTV2300 H. Now, no matter what you're are looking for, be it digital, analog or digital and analog reception support, inbuilt MPEG-2 or universal or regional reception, Leadtek offers a complete range of TV tuner products with PCI Express interface to meet your varying demands and bring you true PCTV enjoyment.

WinFast PxDTV2300 H provides high definition DVB-T and worldwide analog TV reception, including NTSC, SECAM and PAL standards. With full screen stereo/SAP support, you're assured of the best TV entertainment on your desktop. And your PC is able to receive DVB-T and FM radio anytime! Even more, you can now choose the format from MPEG-4/2/1/WMV/VCD/DVD/SVCD for superlative recording effects. Equipped with 9-in-1 A/V cable supporting component video input up to 480p, it is easy to capture videos from CCD camera/camcorder/VCR/DVD player and even a video game console.

Powered up with the exclusive WinFast PVR2, all useful functions, like DirectBurn, Time Shifting, Scheduled Recording, Power on/off by Remote, and TwinView, are simplified and put into a two-layer menu with a very user friendly interface. The Live Broadcasting function turns your PC into a TV broadcasting center and shares fun video with family and friends. With your home PC turned on live TV can be accessed and enjoyed anytime, everywhere through an internet-connected desktop or laptop. Not to forget WinFast's all-in-one I/R sensor remote control for a comfy laid back viewing. You don't even have to get off the sofa to switch the PC screen on or off!

And on top of this banquet of features there's still the added value of the WinFast Mobile Video Express (WinFast MoViE) pack comprising a 3D album creator, iPod & PSP video converter and Orb. The magic of the 3D album creator allows the user to freely create a personal 3D album and to view it on iPod/PSP.

The user is at liberty to carry and view recorded TV shows on iPod and PSP anytime and everywhere through the video converter. Using the Orb application streaming music and videos can be viewed on any internet-connected device such as a mobile phone, PDA, laptop or any other computer.

With the joy of viewing DVB-T and analog TV worldwide, WinFast PxDTV2300 H not only enriches your life with the magic of "universal remote" but propels you into a whole new world of multimedia entertainment .