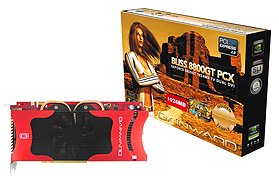 Gaiwnard´s new revolutionary cooling system combines the advantage of silence from heat sink as well advantage of thermal conductivity from fan, offers something over and above the Nvidia reference design.3-Phase Power Supply System Designed for gainward’s Bliss 8800GT allows a better power solution than 2-phase power supply system in the market; as a result, the whole graphics card is able to stays in a lower temperature meanwhile lengthen the life of the graphics card and also enables the over clocking ability. The card is bundled with Tomb Raider and other accessories