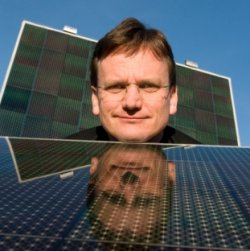 The release of Nanosolar's first products is significant because the company develops a process to print solar cells made out of CIGS, or copper indium gallium selenide, a combination of elements that many companies are pursuing as an alternative to silicon.

The 5-year-old company, based in San Jose, Calif., has raised more than $100 million in financing and has drawn in Google founders Sergey Brin and Larry Page as investors.

Because of the high price of silicon, several companies are making thin-film cells from CIGS, but a number have run into technical problems.

Nanosolar's CEO Martin Roscheisen claims their production process will eventually enable them to ship solar panels that deliver electricity at a price of less than one dollar per watt.