SilverStone working on SideShow device, DAC + amplifier and other products 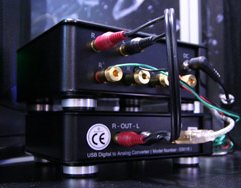 Bit Tech had a look at SilverStone's booth at CES 2008 and browsed around for interesting new products. You can read their full report over here.

In the next couple of weeks SilverStone will release the EB01 and EB02 audio devices. The EB01 is a USB device that converts digital audio to analog signals and the EB02 is a separately sold amplifier that takes the feed from the EB01 or from your headphone jack and outputs it to real stereo speakers. Combined the units will cost about $250.

Another cool product is a multifunctional Microsoft SideShow device that slides into your 5.25" drive bays. The cool thing about this product is that you can easily disconnect it and use it as a MP3 player, the device has 1GB of onboard memory and plays MP3 and video files. Additionally, you can also use it as a Bluetooth remote for your PC.

Other products shown off at SilverStone's booth include a new mouse with a lot of bells and whistles and a ESA version of the firm's TJ-10 case:

Finally, for all of you ESA nuts, Silverstone is hearing the call. The TJ-10 is undergoing the addition of an ESA board for fan control and will be sold as a special model (the five large green-LED case fans are included). As well, Silverstone has received the nod from Nvidia and the ESA group to sell an ESA commander bay insert to control fans on cases that were purchased before ESA was created. The commander will not be certified (as there is no knowledge of what case you could put it in), but it will allow people to get the benefits of ESA in a case that they already own.