Posted on Wednesday, Jan 16 2008 @ 05:30 CET by Thomas De Maesschalck
High-end PC maker Biohazard is one of the first PC makers to show off a system chilled by a three-stage phase change cooler. FUD Zilla has some more info about this system:

We've seen the prototype machine with two 8800 GTX cards and 9650 CPU running at -15 Celsius. The company is still working on the clock speeds, but they promised an impressive score.

The machine will boot with the press of a button and it will take it some 30 seconds to boot. The company will come out with some cool overclocking numbers, as they said that they got the first working unit just days before the show. This compressor will be able to get sub-zero temperatures on both GPUs and a super overclocked GPU and will offer some crazy fast speeds, probably far exceeding 4GHz and some great 3Dmark scores.

This system should be available in the first half of 2008. 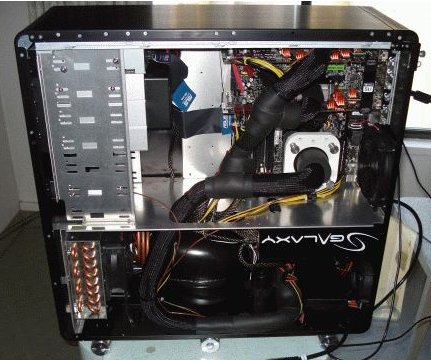