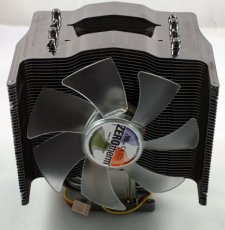 AnandTech has taken a look at the ZEROtherm Nirvana processor cooler:

The new ZEROtherm Nirvana does not look like a butterfly, but the influence of the original butterfly-shaped BTF90 is clearly there in the cooling fin design. That is certainly a good thing if Nirvana works as well at the top of the cooling heap as BTF90 did for the less expensive 90mm mid-range coolers.

For those not familiar with ZEROtherm, it is the marketing division of a company called APACK, a company known more for targeting the OEM market. Since the success of Zalman as a cooling company based in Korea, other Korean companies have aimed for a slice of the enthusiast cooling pie. APACK is one of those companies who manufactures in Korea, and the ZEROtherm division is dedicated to marketing enthusiast level cooling solutions.

Read on over here. The reviewer says the ZEROtherm Nirvana is a good processor cooler for users who won't overclock to extreme levels. The performance of the cooler is very good but with the fan at max speed it's very loud so users of this cooler might want to dial back the fan a bit to reduce the noise to more bearable levels.