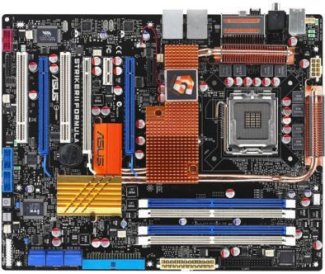 Republic of Gamers (ROG)
The Republic of Gamers is for the best of the best. Sporting the best hardware engineering, the fastest performance, and the most innovative ideas, we welcome the best gamers to join. Extending the ROG tradition, the new Striker II Formula features superb overclocking capability and a rich feature set that includes the SupremeFX II audio card.

A Future-Proof Gaming Platform
The Striker II Formula supports the latest Intel Core 2 processors, including the next generation 45nm multi-core processors with Front Side Bus (FSB) up to 1600MHz.

Today´s games demand the most powerful graphics solutions available. Able to run up to three graphics cards in 3-way SLI, the Striker II Formula is the perfect motherboard for hardcore gaming enthusiasts who demand the most from their rigs. NVIDIA’s 3-Way SLI technology takes advantage of the increased bandwidth of the PCI Express 2.0 bus and features intelligent hardware and software solutions allowing up to three graphics cards to work together seamlessly. This results in performance that´s both scalable while offering more than twice the performance of a single GPU system.

COP EX (Component Overheat Protection - EX)
Overclock with confidence. The COP EX allows overclockers to increase chipset voltages without having to worry about overheating. It can also be used to monitor and in extreme cases, save an overheating graphics card. The ASUS COP EX gives enthusiasts more freedom to overclock with fewer constraints.

Voltiminder LED
When overclocking, over-voltage adjustments are crucial, but they can be risky. Similar to a tachometer´s "red zone", the Voltiminder LED displays the voltage status for the CPU, NB, SB, and memory in an intuitive color-coded fashion.

ASUS C.P.R. (CPU Parameter Recall)
In the unfortunate instance that the system crashes due to an overclocking failure, the days of having to open the computer case to clear CMOS data are in the past. Just restart the system, the BIOS will show the previous setting and users can simply adjust the CPU settings again to restart the PC.

Extreme Tweaker
Extreme Tweakers is the one stop shop to fine-tune your system for optimal performance. Frequency adjustments, over-voltage options, and memory timing settings can all be adjusted in one easy place.

ASUS EPU (Energy Processing Unit)
The ASUS EPU utilizes innovative technology to digitally monitor and tune the CPU power supply with improved VR responses in heavy or light loadings. It automatically provides power for higher performance and can improve efficiency by 7% when the PC is running low intensity applications. Working together with AI Gear 3, this can help you attain the best possible power efficiency, resulting in energy savings of close to 60%.

World Exclusive Hottest DX10 Game Bundle: Company of Heroes: Opposing Fronts Company of Heroes: Opposing Fronts is the next installment in this highly-rated strategy franchise, delivering an unprecedented level of realism all the while revealing a darker, more brutal war. Boasting enhanced lighting effects, mission persistence, improved vehicle and soldier AI, as well as enhanced physics and a dynamic weather system, this game will set new standards in visual realism for the RTS genre as a whole.