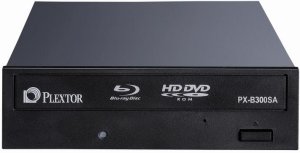 The Plextor PX-B300SA is a dual-layer internal DVD drive for PCs which can read BD-ROM media at up to 6x and HD DVD-ROM at 3x. The drive can also write DVD+R / DVD-R at 16x, DVD+R DL / DVD-R DL at 4x, DVD+RW at 8x, DVD-RW at 6x, DVD-RAM at 5x, CD-R at 40x and CD-RW at 24x. In addition, Plextor has included LightScribe technology to both devices, enabling custom text and designs to be printed/burned onto discs. The PX-B920SA shares the same above specs, but is also a highly versatile Blu-Ray writer, writing BD-R (SL/DL) at 4x, BD-R (SL LTH) at 2x and BD-RE (SL/DL) media at 2x. Both drives utilize SATA connection, and 4MB of data buffer. They are also covered by Plextor's Fast Warranty Service (2-year warranty in the EU, Norway and Switzerland (Collect & Return); other countries 1-year carry-in).

Both optical drives should be available later this month.