MSI developed the MSI PR620 Anion Notebook, which makes it world’s very first notebook that is capable to release anion to better your health. Using the latest in technology, the MSI PR620 Anion Notebook can release up to five hundred and fifty thousand ions/cc (50 cm from the air vent)*. This is more than if you were right next to mountains or the beach. The Anion module can also contain concentrated ozone lower than 0.02ppm. (UL & TUL regulations must be lower than 0.05ppm; high ozone concentration can be harmful to human bodies).

Benefits of Anion
• Sterilization and Detoxification: Ultra-Oxygen free radicals can exterminate all kinds of viruses to prevent its spread. Anion can eliminate toxic gases in the air and destroy the “Silent Assassin”.
• Dust Elimination: Strongly absorbs dust buildups and drifting particles in the air to prevent inhaling into the human body.
• Deodorization and Smoke Free: Removes offensive and foreign smells in the air to better the living conditions
• Adding anions and activated oxygen: elevates productivity, prevents illnesses caused by air conditioning and strengthens the immune system.
• Cosmetology: Applies negative electros to the upper skin cells so viruses are ineffective when attacking cells, leaving the skin smooth and shining.

MSI gaming series notebook with Turbo Battery Energy-Saving Technology
MSI’s Gaming Series Notebook is THE right choice for gamers. After the explosion that was created by the added Turbo Button that increases the CPU speed up to 20%, MSI now introduces the exclusive Turbo Battery Technology. The new GX600 08’ notebook will be equipped with this technology to extend the battery life up to 20%*. The Turbo Battery Mode automatically adjusts the systems workload to save power. MSI will introduce this new leading technology at CeBIT.

MSI introduces the “Dual Turbo” technology, which offers the Turbo Battery mode and the Turbo Engine Drive (CPU speed increases with 20%) in just one button. The “Eco” function saves power, while the “Turbo” design offers increased speed at the touch of a button.

MSI Aesthetics series, new concept notebooks with Natural Biodegradable Materials
MSI’s motto this year for notebooks is “ECO is Beautiful”. Design-wise MSI believes that “Less is more”. MSI is known for its innovative designs as for instance Swarovski crystals, numeric keypad on 15.4” and the MSI Turbo Button. MSI will introduce notebooks designed from natural and biodegradable materials such as leather andwood. 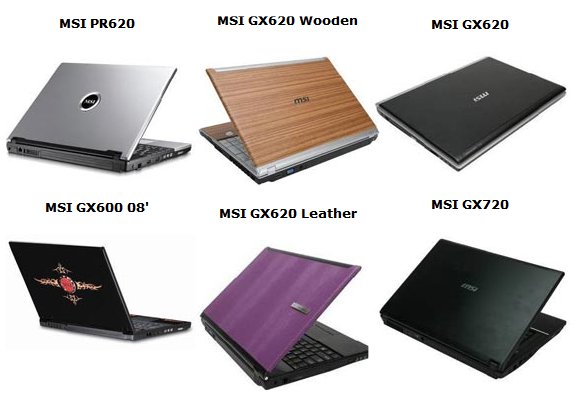