Griffin chips currently feature 1MB L2 cache per core along with support for DDR2-667 and DDR2-800 SO-DIMM memory (up to 8GB). The two cores communicate with each other via an internal crossbar switch. In addition, the CPU runs on AMD’s updated HyperTransport 3.0 specification.

In order to reduce power draw, AMD says that Griffin features three independent power planes. One power plane is given to each CPU while the third one is taken by the Northbridge. To further help promote power efficiency, AMD says each core can also run at independent frequencies. AMD claims that the cores can dynamically shift frequency levels while executing a thread.

The RS780M includes an integrated Direct X 10 graphics controller which AMD says is four to five times faster than Intel’s X3100 IGP, and brings support for HDMI and HDCP + Audio to Puma via AMD’s Universal Video Decoder. The chipset also features built-in support for two display controllers. Puma does support DisplayPort functionality; however, it is up to each individual board maker to implement in the feature.

To help save power when running off of battery power, AMD says its PowerXpress technology dynamically switches, without any reboot, from external graphics to integrated graphics. According to the company, the change happens instantly and unnoticeably when changing power sources, however, the option is provided to disable this feature. Likewise, Hybrid Crossfire technology will allow you to use a discrete graphics controller with the integrated graphics controller for increased gaming performance.

As AMD’s answer to Intel’s Santa Rosa, analysts predict that the launch of Puma is crucial to the company’s success and financial well being. 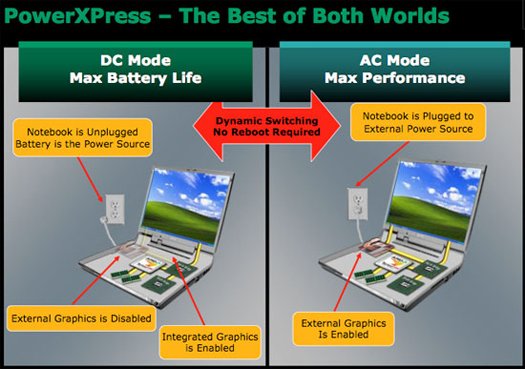