Posted on Saturday, Mar 22 2008 @ 23:15 CET by Thomas De Maesschalck
Core 77 published pictures of a new "green" powerstrip concept that features footpedals to allow you to easily unplug your devices.

Eject Powerstrip is a forward-looking redesign of a powerstrip that would allow people to easily and enjoyably unplug their devices. Eject Powerstrip solves the above real life problems by adding small foot pedals to the traditional power strip. The pedals are used to unplug devices that are not being used. Using a see-saw action, stepping on the foot pedal forces the plug's prongs up and outward, releasing the plug from the strip and immediately shutting off the sockets from children. This eliminates the need to bend down in order to unplug the device or resort to yanking the cord out. The user merely presses on the pedal with his foot, a gross movement aided by body weight to eject the plug from the designated socket. While form has not been neglected in this design, the virtue of this product rests in its unique functional improvement on a very common gadget.

When designing Eject Power Strip, we had to keep in mind that the strip (just like any other power strip) could be thrown away or replaced once it is damaged. This is why polypropelene became our material of choice. The concept is based on ease of use, but mainly energy efficiency. With this design, the user is compelled to unplug his appliances. The foot pedal is a very interactive addition to a previously boring and unsatisfactory action. Not only does the pedal eject the prongs, it also secures the sockets away from children. The user does not need to worry about accidents when he unplugs an electrical cord. 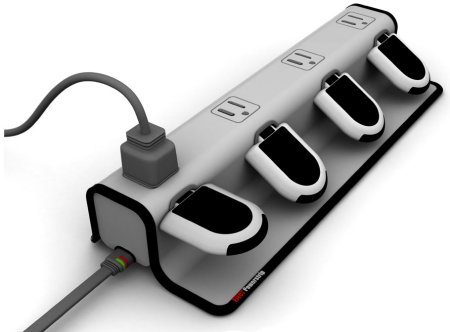