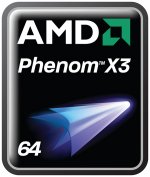 AMD is rolling out its new chips today. They released their new B3 revision quad-core processors and there's also the release of world's first triple-core processor lineup; the Phenom X3 8000 series. Users will soon be able to buy systems with Phenom X3 8400 (2.1GHz) and Phenom X3 8600 (2.3GHz) processors.

When paired with the AMD 780 series chipset, AMD Phenom X3 processors can deliver significant enhancements in gaming and high-definition experiences for mainstream PC customers. This AMD desktop solution can provide a full HD experience with support for the latest and most demanding formats, including VC-1, MPEG-2 and H.264 on a mainstream PC. With the AMD Unified Video Decoder (UVD), the solution can process HD playback on the better-suited GPU rather than the CPU so consumers may enjoy a smooth HD viewing experience—less lag, stalling and dropped scenes—in the latest Blu-ray titles.

“In 2007, AMD committed to delivering AMD Phenom triple-core processors in Q1 2008 and today the company makes good on that promise,” said Bob Brewer, corporate vice president, strategic marketing, AMD. “AMD understands that today’s PC applications are best accelerated with a range of multi-core products from quad- to triple- to dual-core processors, and that’s why we now deliver the broadest multi-core desktop lineup in the industry.”

Systems powered by AMD Phenom X3 processors 8400 (2.1GHz) and 8600 (2.3GHz) are expected to be initially available from leading OEMs and system builders. Pricing was not available at press time.