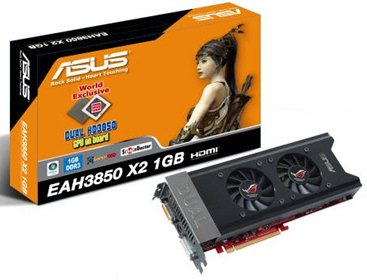 Asus is one of the first to release a graphics card with two Radeon HD 3850 GPUs:

Unparalleled Performance with Just One Card
As the world’s first on-board dual HD3850 graphical solution, the ASUS EAH3850X2/HTDI/1G is able to elevate 3DMark06 scores from 9883 to 13250 – an astonishing 34% speed improvement when compared to single-GPU solutions. Even comparing the EAH3850X2/HTDI/1G with two single-GPU graphics cards in a Crossfire configuration, the 3DMark06 score can still be boosted from 12585 to 13250, which is 5% faster. Gamers can now truly feel the exhilarating rush of extreme gaming performance only with the ASUS EAH3850X2/HTDI/1G.

1GB GDDR3 Onboard Memory for the Best Graphics
Memory size is paramount if one does not want to suffer from graphic bottlenecks. With most current and upcoming games requiring high video memory requirements; plus the fact that game developers are constantly increasing the estimated video memory size, the ASUS EAH3850X2/HTDI/1G is able to truly deliver a world-class graphical performance – allowing users to fully enjoy games or movies without lag or stuttering even at ultra high resolutions and maximum quality settings.

Unprecedented Rock Solid Quality from ASUS
In line with the Rock Solid promise of quality from ASUS, the EAH3850X2/HTDI/1G comes with several solutions to provide top quality graphic performance. With the EMI shield, 3~10dB EMI Interference can be reduced to provide stable signals, the temperature of the newly adopted DIP Spring Chokes is 5~10°C lower in comparison to traditional Toroidal Coil Chokes; while the Japan-made polymer capacitors lowers power loss to provide more stability. Users will thus feel at ease while enjoying extreme performance with ASUS' uncompromising quality only with the ASUS EAH3850X2/HTDI/1G.

Exclusive ASUS GamerOSD for Versatile Graphics Usage
The ASUS EAH3850X2/HTDI/1G is also equipped with the exclusive ASUS GamerOSD that unleashes the true power of ASUS' VGA cards. This feature is able to deliver GPU overclocking from onscreen displays during gameplay – allowing users real-time performance upgrades when they require it. Additionally, it also provides users with the option to record live gaming action or live broadcasting over the Internet with ease.