NVIDIA to make all games 3D 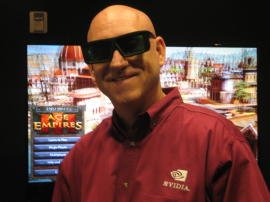 One of the latest crazes in movie theaters a couple of weeks ago was the U2 3D concert film which allowed fans to see U2 in 3D. NVIDIA is hoping that gamers will like its new 3D technology just as much.

Drew Henry, general manager of NVIDIA's Media Communications Processor (MCP) group, says beginning this summer, any PC with a NVIDIA GPU will be able to run games in 3D with the aid of 3D glasses.

This has been done before but the new thing is that game developers won't have to make changes to their games:

The software driver will enable the ability to have two views--left eye and right eye--which, at the push of a button, appear blurry and pixelated to the naked eye. When viewed through 3D lenses though, the game pops into three-dimensional mode.

The important part is that game developers won't have to do anything differently. They just continue to make their games the way they want, and Nvidia will take care of the rest. It's just an option for gamers though--it doesn't mean all games have to be three-dimensional.

The challenge for Nvidia is making the glasses widely available at retail, as well as turning the silly-looking lenses into something actually cool and "not as geeky-looking," said Drew Henry, general manager of the company's Media Communications Processor (MCP) group.

Later this year NVIDIA will also add more value to their graphics cards by making the AGEIA PhysX acceleration available to everyone with a GeForce 8 or 9 series graphics card.