Posted on Saturday, May 10 2008 @ 22:17 CEST by Thomas De Maesschalck
Engadget found some leaked photos of the Xenium 800. This iPhonish phone features a large touchscreen:

Apparently, Philips is about to throw its hat in the ring with a device called the Xenium X800. The familiar looking unit will sport WiFi, a WQVGA "e2e" (or "edge to edge") touchscreen, and appears to be running a proprietary OS which looks considerably better than most phones in this class. Sure, it's heavily knocking off Sony's XMB and that new BlackBerry OS 4.6, but there are worse offenses that could be made. 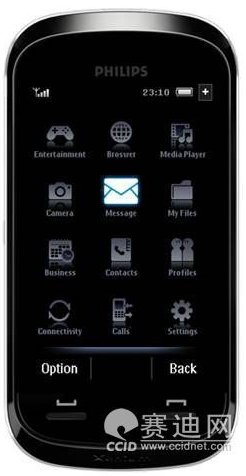