Posted on Wednesday, May 14 2008 @ 23:17 CEST by Thomas De Maesschalck
Gigabyte just started a PR war against Asus. Tom's Hardware talked to Gigabyte's technical team in Taiwan and received a bunch of slides in which the motherboard maker shows how Asus supposedly lies and deceives its customers.

Gigabyte claims Asus lies about the power savings of its EPU technology, shows the superiority of its own DES technology, says Asus' EPU doesn't have phase changing capabilities and calls out Asus for using "questionable components" on its motherboards.

When the slides were shown, the message from Gigabyte’s technical team was obvious: Asus outright lied about its performance figures.

According to Asus’ own documents, motherboards labeled with an EPU logo contain an "Asus Energy Processing Unit." Essentially, these motherboards are supposed to contain components designed specifically to lower power consumption and provide better electrical efficiency throughout — there’s really no logical "processor" involved. Asus claims that EPU motherboards can deliver up to 80.23-percent "power savings" from motherboards without EPU components.

At this point, Gigabyte claims that there are no truths to Asus’ claims of 80.23-percent, and in fact is more realistic at 58.6-percent. Gigabyte says that Asus made no changes to its motherboards via firmware, design or component changes — only numbers were changed on product advertisement and packaging. Gigabyte noted that Asus was "playing numbers marketing" and "cheating end users." 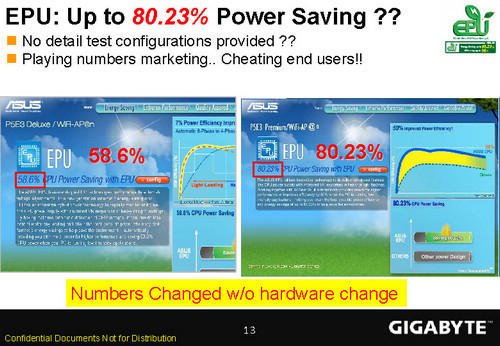 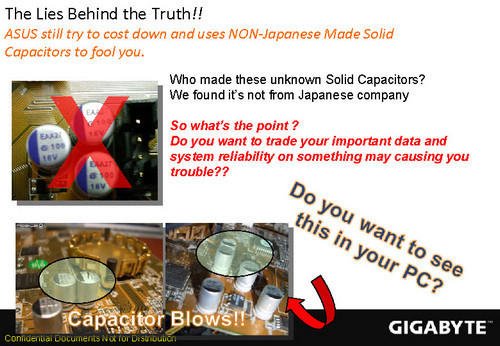 More info and all the slides over at Tom's Hardware.