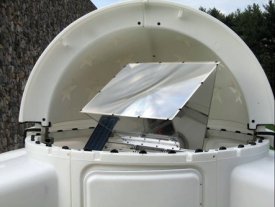 IBM researchers announced a breakthrough in photovoltaics technology that could make it a lot cheaper to produce electricity with photovoltaic cells. The new technology uses a large lens to concentrate the Sun's power, similar to using a magnifying glass to start a fire. This generates a lot of heat but IBM has invented a new cooling technology for solar cells that makes use of advanced liquid metal thermal cooling. The firm says this technology delivers about five times the electrical power density generated by typical cells using CPV technology.

By mimicking the antics of a child using a magnifying glass to burn a leaf or a camper to start a fire, IBM scientists are using a large lens to concentrate the Sun’s power, capturing a record 230 watts onto a centimeter square solar cell, in a technology known as concentrator photovoltaics, or CPV. That energy is then converted into 70 watts of usable electrical power, about five times the electrical power density generated by typical cells using CPV technology in solar farms.

If it can overcome additional challenges to move this project from the lab to the fab, IBM believes it can significantly reduce the cost of a typical CPV based system. By using a much lower number of photovoltaic cells in a solar farm and concentrating more light onto each cell using larger lenses, IBM’s system enables a significant cost advantage in terms of a lesser number of total components.

For instance, by moving from a 200 sun system ("one sun" is a measurement equal to the solar power incident at noon on a clear summer day), where about 20 watts per square centimeter of power is concentrated onto the cell, to the IBM Lab results of a 2300 sun system, where approximately 230 watts per square centimeter are concentrated onto the cell system, the IBM system cuts the number of photovoltaic cells and other components by a factor of 10.

“We believe IBM can bring unique skills from our vast experience in semiconductors and nanotechnology to the important field of alternative energy research,” said Dr. Supratik Guha, the scientist leading photovoltaics activities at IBM Research. “This is one of many exploratory research projects incubating in our labs where we can drive big change for an entire industry while advancing the basic underlying science of solar cell technology."

The trick lies in IBM’s ability to cool the tiny solar cell. Concentrating the equivalent of 2000 suns on such a small area generates enough heat to melt stainless steel, something the researchers experienced first hand in their experiments. But by borrowing innovations from its own R&D in cooling computer chips, the team was able to cool the solar cell from greater than 1600 degrees Celsius to just 85 degrees Celsius.

The initial results of this project will be presented at the 33rd IEEE Photovoltaic Specialists conference today, where the IBM researchers will detail how their liquid metal cooling interface is able to transfer heat from the solar cell to a copper cooling plate much more efficiently than anything else available today.

Specifically, the IBM team used a very thin layer of a liquid metal made of a gallium and indium compound that they applied between the chip and a cooling block. Such layers, called thermal interface layers, transfer the heat from the chip to the cooling block so that the chip temperature can be kept low. The IBM liquid metal solution offers the best thermal performance available today, at low costs, and the technology was successfully developed by IBM to cool high power computer chips earlier.

While concentrator-based photovoltaics technologies have been around since the 1970s, they have received renewed interest in recent times. With very high concentrations, they have the potential to offer the lowest-cost solar electricity for large-scale power generation, provided the temperature of the cells can be kept low, and cheap and efficient optics can be developed for concentrating the light to very high levels.

The goal of the projects is to develop efficient photovoltaic structures that would reduce the cost, minimize the complexity, and improve the flexibility of producing solar electric power.

In addition to the photovoltaic research announced today, IBM is focused on several areas related to energy and the environment, including energy efficient technology and services, carbon management, advanced water management, intelligent utility networks and intelligent transportation systems. With decades of leadership in environmental stewardship, proven ability to solve complex challenges and unparalleled global reach, IBM is uniquely positioned to increase the efficiency of today’s systems and enable our clients’ “green” strategies.