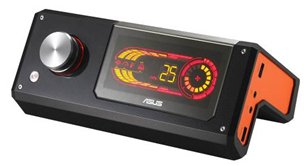 Asus has released a new external graphics card multimedia docking station, the ROG XG Station. The XG Station is also bundled with the EN8600GT/HTDP/256M graphics card, and equipped with an Express Card interface – seamlessly integrating notebook computing with powerful PC graphical power. It also incorporates 4 USB 2.0 ports and Dolby Technology – doubling as a USB hub that delivers true AV enjoyment. The firm already released a similar product more than a year ago but that unit never made it to the market.

Engage Mobility with Powerful Graphics Processing
With the explosion of popularity of high-performance, powerful laptops in recent years, there is an ever-increasing desire for computing users to utilize the same laptop computer at home, in the office, and also on the road. However, in order to conserve space, weight, and functionality, many of these sophisticated laptops have made sacrifices in terms of graphics, audio or processing power. By providing the power of a dedicated 3D graphics engine, users simply have to connect the XG Station to any LCD monitor, connect to the notebook via an Express Card connector, and then they are ready to game in with enhanced graphics. This setup easily provides users with a complete mobile notebook computing solution while retaining the advantages of high powered 3D gaming and multimedia experiences.

Large Information Display and Easy Controls
With the adoption of a large LED screen, the XG Station is designed with ease of use in mind. This easy-to-read screen provides clear displays of critical system status statistics that include:

Fast and Upgradeable Graphics Power
The XG Station is the world´s first docking station to provide a standard PCI Express slot for additional graphics computing power for notebook computers to deliver VISTA Premium graphical performances. It also conveniently accommodates future graphic upgrade possibilities for technologies such as HDCP. Lab experiments made on a notebook based on Intel 945GM and 965GM graphics connected to the XG station with an ASUS EN8600GT graphics card showed an astounding 12 and 6.7 times faster graphics acceleration respectively.