Nehalem and X58 show up in Taipei

MSI showed off a Intel Nehalem processor and X58 chipset based motherboard in Taiwan. Bit Tech writes the engineering sample from MSI was a quad-core with eight threads model, the Nehalem chips that will be released in the fourth quarter will likely be eight-core parts.

The site talks about the new socket of the chip and says you will have to buy a new processor cooler for Nehalem chips as the socket fittings have changed. Bit Tech also notes the memory slots are now much higher up the motherboard because of Nehalem's integrated memory controller and says the motherboard from MSI has six memory slots to support triple channel DDR3.

Tylersberg, or X58 as you will come to know it, actually takes up a very large die-space considering it’s (currently) built on 65nm. MSI told us that it was actually significantly hotter than current chipsets mostly because of the super-fast QPI links from the CPU. It also features 36 lanes of PCI-Express 2.0 so you’ll get a full x16 by x16 and even an x4 thrown in for free – here MSI uses it as part of an extra x16 slot, but now it comes without the downside of disabling other components like current boards have. The south bridge is still ICH10 – so nothing new here.

MSI said it was debating getting rid of the floppy port entirely, and even the PS2 ports, however the company's representatives said they always receive complaints when legacy features are dropped – the most recent was a big backlash over dropping the parallel port in favour of using the space for four USB 2.0 ports?!

While the board isn’t a final product yet – there are still some design changes to be done, it looks like all the usual suspects are being included: JMicron eSATA and IDE, Silicon Image “hardware” SATA RAID, Realtek ALC888 HD audio and RTL8111 Gigabit Ethernet, although MSI does now include eight USB 2.0 ports in the rear I/O. 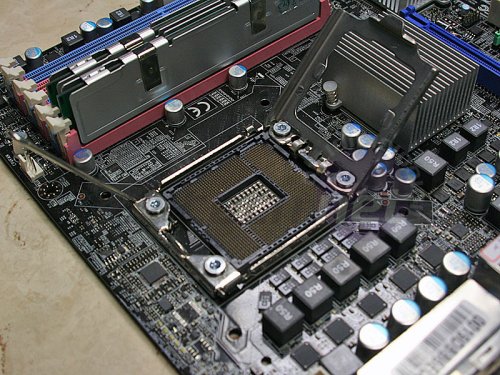