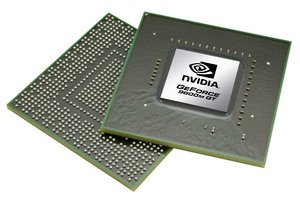 With the launch of the GeForce 9M Series of notebook GPUs, NVIDIA has once again engineered the world's fastest notebook GPUs, designed for running today's graphically intensive games, 3D applications and HD movies at extreme resolutions. In addition, this new GPU features a multi-core architecture which will not only speed up entertainment applications, but will also speed up today's lifestyle applications, like video encoding from a PC to a small personal media device, where the speed up in the video conversion is up to 5x faster with the GeForce 9M family GPUs."

In addition, the new GeForce 9M notebook GPUs enable the world's first notebooks with Hybrid SLI technology. The new technology enables two NVIDIA GPUs, one low-power and one high-performance, to work cooperatively in the same PC to deliver two features -- GeForce Boost and HybridPower. These features deliver more performance from both GPUs for visual computing when needed, or save power by switching to the low-power GPU when not. Hybrid SLI gives users the quality and performance benefits of a high-performance GPU without sacrificing battery life.